June 20, 2011– BwB began Day 1 of camp for the Western Area YMCA in Birmingham, AL. The campers were eager, excited, and ready to learn. My workers were also pumped for the first day. I must say it was a success! After meet and greet; the campers rotated stations where they were taught things such as; dribbling skills, shooting techniques, defense stance & slides, different passing drills, to name a few. After lunch they attended a class session on how to use basketball as a tool for life! Hot shot, dribbling relays, and 3 on 3 followed. Day 1 was a success!!

Day 2 of BwB Camp was very exciting, while Team Asia won the most competition drills, Coach Brandon became the campers favorite, lol. New drills were added and the campers paid attention to detail and gave their all. Shouts to Coach Ware of the MHS Lady Patriots for coming in to speak on using basketball as a tool for life!

Day 3 of BwB Camp got even better. The older group got a sneak preview into BwB skills & drills from an individual training standpoint. While it was a challenge for most; they were up for it! And the younger kids are the best, they just enjoy running around and trying whatever you teach them! Special thanks to my staff for giving their testimonies on hard work and perseverance!

Day 4 of BwB was ballerific! I must say these campers are really improving on their skills. They want to Improve!! It’s good to see them excited about learning. The older group actually looks forward to the drills and skills session. Shout out to all the free throw contest winners!!

Day 5 of BwB Camp is in the bag! Campers TRULY enjoyed themselves and learned a lot today & this week about the game of basketball on & off the court. In the afternoon session campers enjoyed the 3pt shoot outs, hot shots, musical basketball chairs, all star games,  & staff game; which were all a success!!! 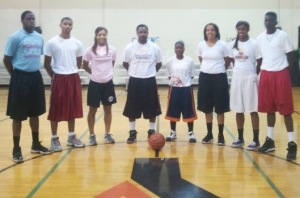 SPECIAL SHOUTS TO MY STAFF!!!

“You should always want your coach to be critical.  It gives you an opportunity to learn and to overcome adversity.”

“You maximize your potential by being humble develop a work ethic, strive to be a good person, and to be the best teammate you can be.”

“Use your scoring ability to be a better passer, and your passing skills to become a better scorer.”

“You can’t be a point guard who gets into the lane and always passes. Capitalize on the real estate you have gained.”

“Point Guard must be able to pass with both hands equally off the dribble.”

‘”I am always thinking how can I get myself better.”

“On the fast break, after 2 or 3 hard dribbles you should see the whole floor and know where all your teammates are.”