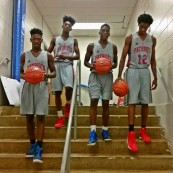 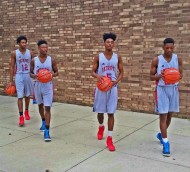 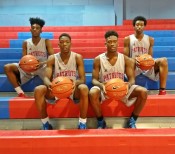 Jermaine signed a scholarship to play for Alabama Southern Eagles. He graduated with a 3.6 GPA / 22 on the ACT. He was name Salutatorian of Midfield H.S. He is the epitome of a student-athlete. Jermaine finished his career with nearly 2,000 pts, and over 400 assist. He was a  2x All State Selection, he won 2 State Titles, and appeared in 3 Final Fours.

“A Day in The Life of Coach Barber”

More articles under the “In the News” Tab

Congrats to the following Seniors on their graduations and for signing National Letters of Intent to play basketball in College: 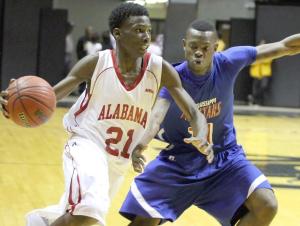 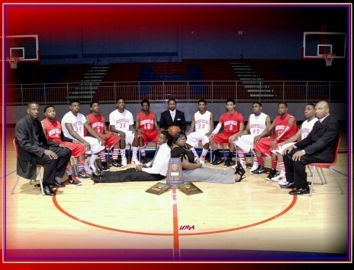 Team Pates head to the State Final 4 for the 2nd time in as many years: The Pates would take on #7 Oneonta in the Semi Final game. After a subpar 1st half the Patriots came out with a great second half to win 71-52 (highlights below). This win advanced the Pates to the State Championship game for the first time in 28 years. Midfield would see #1 Butler, who put the Pates out in the Semi Finals last year. After scoring only 20 pts through 3 quarters, the Pates would finally find their niche, scoring 26 4th quarter pts. However the Pates still found themselves down by 2pts with 2.8 seconds remaining……….Below see what would become “The Shot” seen around the nation!!!!! Can you say 4A State Champs??????? Also see postgame press interviews and much more!!

Feb. 23-25, 2012: Pates Head to Regionals after more Adversity, but prevailed in shocking fashion: Beating #4 Dadeville 54-48 after being down by 15pts, and then taking down a TOUGH Sumter Central squad 54-52 on a last second lay up:

Feb. 10-13: We opened the first round of Area play vs  #7 Calera; and for the 3rd time this season/8th overall, the Pates would down Calera. This time ending their season for good!

2-1-12 Pates celebrate Senior Night 2012: The following Patriots were honored on the Senior night! Christian Jones, Jared Key, Brandon Moss, Brian Bender, Terrence Washington, and Student Manager Cameron Stallworth…And for the first time in my 3 year tenure as head coach, we won on Senior Night. The Pates would hold off a TOUGH 6A Minor Tigers team 50-42. I can’t say enough about these young men, most of whom been with or around me for the last six years.Below B Moss Slam Dunks as time expires….:Also MHS Slideshow below for Senior Night Pics.

Midfield takes down area foe Calera in first & second meeting. The two will face off in the first round of the Area on Feb 10 http://highschoolsports.al.com/news/article/4057206821955641283/boys-basketball-midfield-70-calera-62/

Congrats to the Midfield Patriots for winning the Coosa River Catfish Battle:

After having an awesome showing in AAU Nationals in Orlando, FL, he was named to ESPN’S 100 Watchlist for the C/O 2015. http://espn.go.com/college-sports/basketball/recruiting/playerrankings/_/position/shooting-guard/class/2015/view/position

5-4-2011-The Midfield High School held their annual athletic banquet. I must say it was a success. This was an opportunity to show the student-athletes of Midfield how much they were appreciated for their hard work on and off the playing fields.